REVIEW FOR
THRU EYES OF A CHILD

The Don Lewis Band is back again with passion on their new album Through The Eyes of a Child. Once again, Lewis and his cohorts produce a stunning and vibrant set for those into the roots-alternative rock scene.
The cover tells you where the heart of Mr. Lewis is, and I can relate 100%. I have children of my own and they help me to lighten up and see things as they do so I can escape my sometimes, too serious adult world.
The musicianship is outstanding on this album and the vocals of Lewis are uniquely infectious and warm. You know every word he is singing means something to him. He is either singing about his wife or his child on the opening track “You Make Me Smile (Crazy for You),” and it sets the tempo for the entire album. On “You Can Depend” he sings about the innocent eyes of a child, once again restating the importance of family through his music. The curtain closer and title track ends the proceedings appropriately as Lewis has you looking through those eyes of innocence, offering you a reprieve from all the madness surrounding you. If that is not enough honest to goodness emotion and slice of life stuff, you get to hear some great guitar licks (Tom Delfavero) on cuts like “Drowning,” a warning about being to egotistical.
This is the kind of music that will enhance or change any mood-and no matter what your body will be bouncing and a smile will come to your face, it is inevitable.  The Don Lewis Band has done it again; they not only won my ears, they took my heart for over twenty minutes.© Keith "MuzikMan" Hannaleck-http://www.muzikreviews.com

BETWEEN THE LINES" REVIEWS

Once again, a singer/songwriter emerges from out of the shadows (in this case, New
York State's Hudson Valley), to offer up a contemporary recording with a decidedly
retrospective/traditional feel. The DON LEWIS BAND is such a musical act and
BETWEEN THE LINES is such a recording. It is the kind of music that brings people
together because it acknowledges the very traditional roots rock/pop-rock foundation
from whence it came, dispensing sounds and moods that lend themselves to
reflection, reverie and realization. In short, BETWEEN THE LINES is music for just
about anyone, anywhere, and at anytime.

Vocally, I find Don Lewis
to be somewhat of a cross between Ken Block of Sister Hazel, Adam Duritz of the
Counting Crows and John Mellancamp. He has a quiet, yet considered approach to
lyrical phrasing, and it is a style which lends itself perfectly to the honest emotional
revelations within this release.

“Between The Lines” is an extraordinary CD from one of
those bands that you never heard but wish you did. The Don
Lewis Band is like the Allman Brothers meets Hootie & The
Blowfish meets Marty Balin. What can I say? Lewis reminds me of
Marty Balin when he was with the Jefferson
Airplane/Starship.The first eight tracks are new songs for the faithful
and therest are digitally remastered tracks from three
previous albums (see detailed track listing). Many people refer
to thiskind of music as roots rock. For me it’s plain and
simple, itsjust great music. There are a ton different influences
going here, and it’s all so wonderful. Like my friend
Michael Allison says from the The Globalmuse.com, “This is real
music.” This is down to earth good time rock and roll with a little
bit ofblues, jazz and pop mixed in for good measure.
Eighteen tracks and not a dud found, that’s right, you
heard me right. That in and of itself is an amazing
accomplishment considering how much music is on this CD. Fair
warning, if youput this in your CD player it won’t come out for a
long time. This is infectious happy music… the kind of music to
have blaring through your speakers on a back road on a cool
summer evening with the windows rolled all the way
down. Now that’s livin’ folks. Pick this CD up now; you
can’t live without it.
© Keith "MuzikMan" Hannaleck
August 29, 2001

Don Lewis Band – Between The Lines

If you like good old American rock and roll, you’ll love the Don Lewis Band. The songs are catchy, the lyrics arehonest and straightforward, and the band is top-notch. There’s a range of styles from acoustic to electric on Between The Lines, and the group’s sound can be compared to Matchbox 20, Sister Hazel and Edwin McCain. It’s adult rock with just a hint of twang. The CD has 8 new tracks, plus 10 songs from previously released albums, so it’s a great opportunity to hear a wide sampling of music from an accomplished group.
check out the sight--
http://www.suite101.com/article.cfm/3985/78812

-by Michael Allison -
The Don Lewis Band is a solid roots rock band
that is very much like popular acts like Train...
There are many influences on
this album, those two bands only possess a small portion
of what the Don Lewis Band is about. The music
has a strong singer/songwriter intelligence
with a smooth radio rock groove. This 18 song CD contains
several new tracks and also a collection of
some of Don's previously released and digitally
remastered bonus tracks. Just about every
song on this CD is great. That is
no small accomplishment taking into consideration the amount
of music on this CD. There is definitely no shortage of
potential hits on this album. I seriously doubt if there is
any shortage of Don Lewis Band music fans out
there either. It's always nice to know that real
music is still being made.
Don Lewis makes some very real music. There is a ton
of intelligent songwriting and actual musical substance in
this album. This is one album
that will both inspire and enlighten music fans all over the world.

Jaunty jangle roots rock with just
a hint of the groove.  the odd bit of syncopation that
actually adds to the song rather than turn
it into a derivative mess...There's even a slow
song that manages to be more moving than cloying
("Believe").  These guys have been at it for a while
(there are bonus tracks on the dosc from three
previous releases), and they have obviously have
learned some important lessons...The eight tracks
of Between the Lines...are great. No holds barred, solid,
bright tunes with a definate band character.  The
Don Lewis Band has come a good ways, and the latest stop is
most impressive.

Ms. Fairabanks says, "What always gets to me is the sheer volume
of material Lewis writes that is catchy, hooky, thoughtful, thoroughly
enjoyable.  I'm a fan, I admit it."

She goes on to say, "Lewis has a lot going for him. On one side,
he's got a wonderful reciprocity working with his fans:  He's able to
touch his listeners through his music, and they respond by encouraging
Lewis to keep heading for that illusive--and often times frustrating--
brass ring.  On the other side, this album showcases his consistency
as a strong songwriting talent..."

FOR A COMPLETE COPY OF THE ARTICLE, EMAIL US WITH
YOUR ADDRESS AND WE'LL GET YOU A COPY.

ALBUM OF THE WEEK"
BY STEPHEN ISRAEL

You can always count on Orange County's
to make smart, solid, music that sounds as
musically full as it is lyrically focused.
Take his new album, "Between the Lines."
Along with several remixes of Lewis' best tunes,
the album features eight new songs.
They're tight acoustic-electric modern-rock
songs featuring Lewis' emotional vocals, the
colorful instrumentation of Tom Delfavero's
guitars, Troy Hughes' bass, Jason Anderson's
drums and grab-you-in-the-gut lyrics-sample:
"Everything we are is all we need/Even if they
break us to our Knees/I will believe."

Listen to Song Samples from Only Heaven Knows 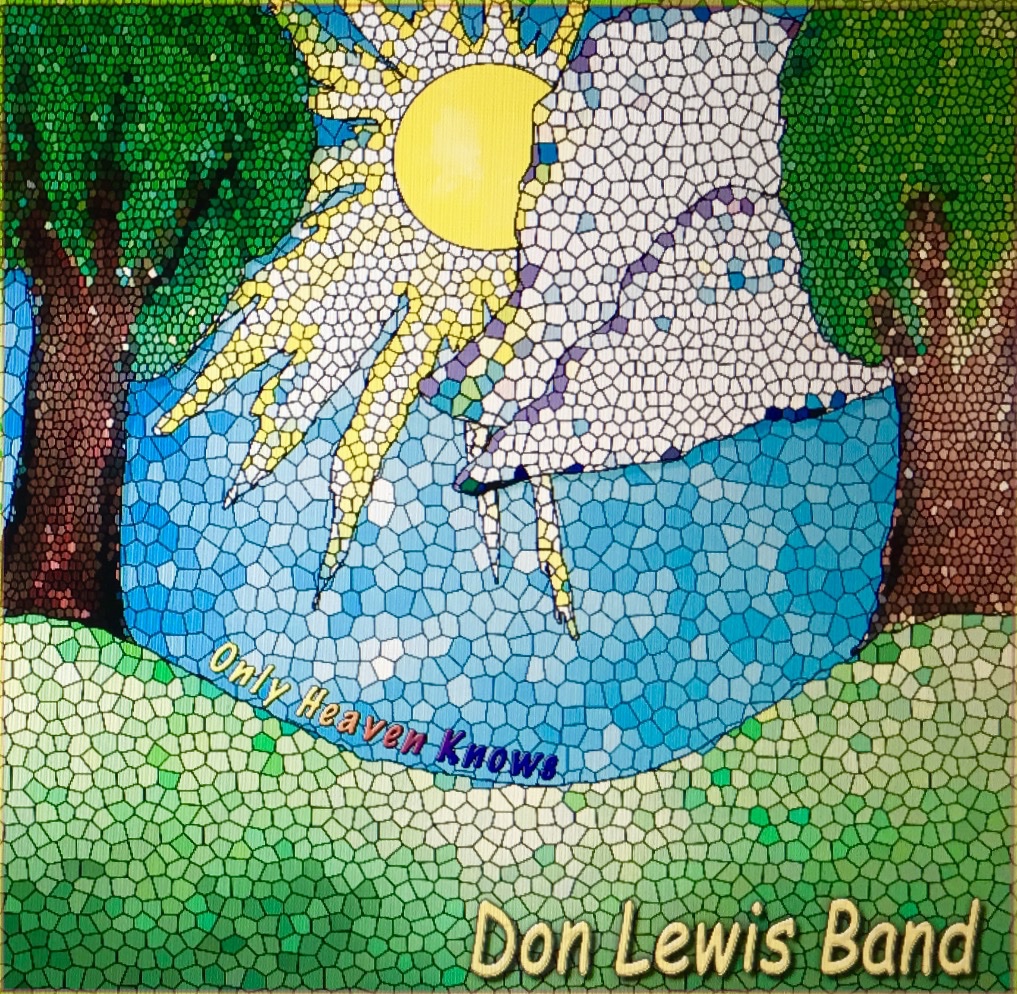 You look at me with your mother’s eyes
So many questions and so many whys
What can I do? What can I say?
To help you believe in the angel you are
When the world tries to tear your heart
You know it makes me want to cry
When you ask me “Why?”
Only Heaven Knows
You ask me “Why?”
Only Heaven knows
You sing me songs about butterflies
And dream about castles that float in the sky
I feel the seasons slip away
I know I can’t keep you from all of the pain
But I know I will still try in vain
And when it’s time for you to fly
We’ll both be asking “Why?”
Only Heaven knows…
Why some people live and some people die
Why the innocent pay for the sins of our lives
Nothing ever seems to change
Still we believe and still we survive
We pick ourselves up and get back in the fight
We hold on every day
Only Heaven knows…